Editura Universitara has made a mark on the book market in Romania through its high academic attitude of its publications dedicated to academic education, science, culture as a whole. One of the principles of our activity was represented, from the very beginning, by the constant orientation towards the teachers, the scientists community who ensure, through their efforts, the increasing visibility of the Romanian research in the country and in the world.

The exceptional results that led to all these concerns are demonstrated, among others, by the fact that our publishing house enjoyed in 2006 the CNCSIS accreditation, reconfirmed in the following years, then maintained in 2012 when the University Publishing House was accredited by the National Council of Scientific Research (CNCS). Subsequently, the National Council for Attestation of University Titles, Diplomas and Certificates (CNATDCU), following the evaluations made on the other scientific fields, included the publishing house among the publishing houses with recognized prestige.

Editura Universitara is present in dozens of university libraries, according to the international online catalog WorldCat (www.worldcat.org) and has concluded partnerships with research institutes in Bucharest and in the country.

The same time, we have the quality of membership of the Romanian Association of Publishers (AER), the most prestigious national profile organization.

The extent and diversity of our editing offer is reflected in our more than 200 titles published annually, and in the 18 collections corresponding to the most diverse areas:

We pay a special attention to the process of promoting the scientific quality of our works and for this purpose, we use a diversity of methods, as:

- Organization of seminars, symposia, book exhibitions, book launches (in book fairs, as well as in public and university libraries, as well as the specialized departments, where university - an important and well-represented segment of the publisher);

- Participation in various conferences and congresses and events organized by the Universities of Bucharest and the country (Open Day).

- Participation in civic and cultural activities to promote the quiz books, in which we offered prizes  (The search for a star - Antena 1 - Ovidiu Cuncea producer, Urban Reading - campaign initiated by volunteers and supported Civika.ro the Metrorex and newspaper, held at the Metro - November 3., 2009.)

- Opening partnerships with libraries in the country and abroad and keeping constant connection with them by sending catalogs, newsletters, special offers and book donations.

Editura Universitara instituted, in 2017, the “CORNELIU TURIANU” AWARD, in memory of prof. Univ. Dr. Corneliu Turianu. The prize is awarded, every year, for the best specialized book published in the collection of Legal and Administrative Sciences, at the University Publishing House.

Editura Universitara Publishing House has an ultramodern printing house, able to edit a book in excellent graphic conditions every 5 minutes. This approach is supported by editors, proofreaders, graphic designers who work here. We print only works that appear under the auspices of the University Publishing House and we do it with seriousness and responsibility.

To value the presentation and activities, Editura Universitara has been recognized with numerous awards, the most recent of them are: 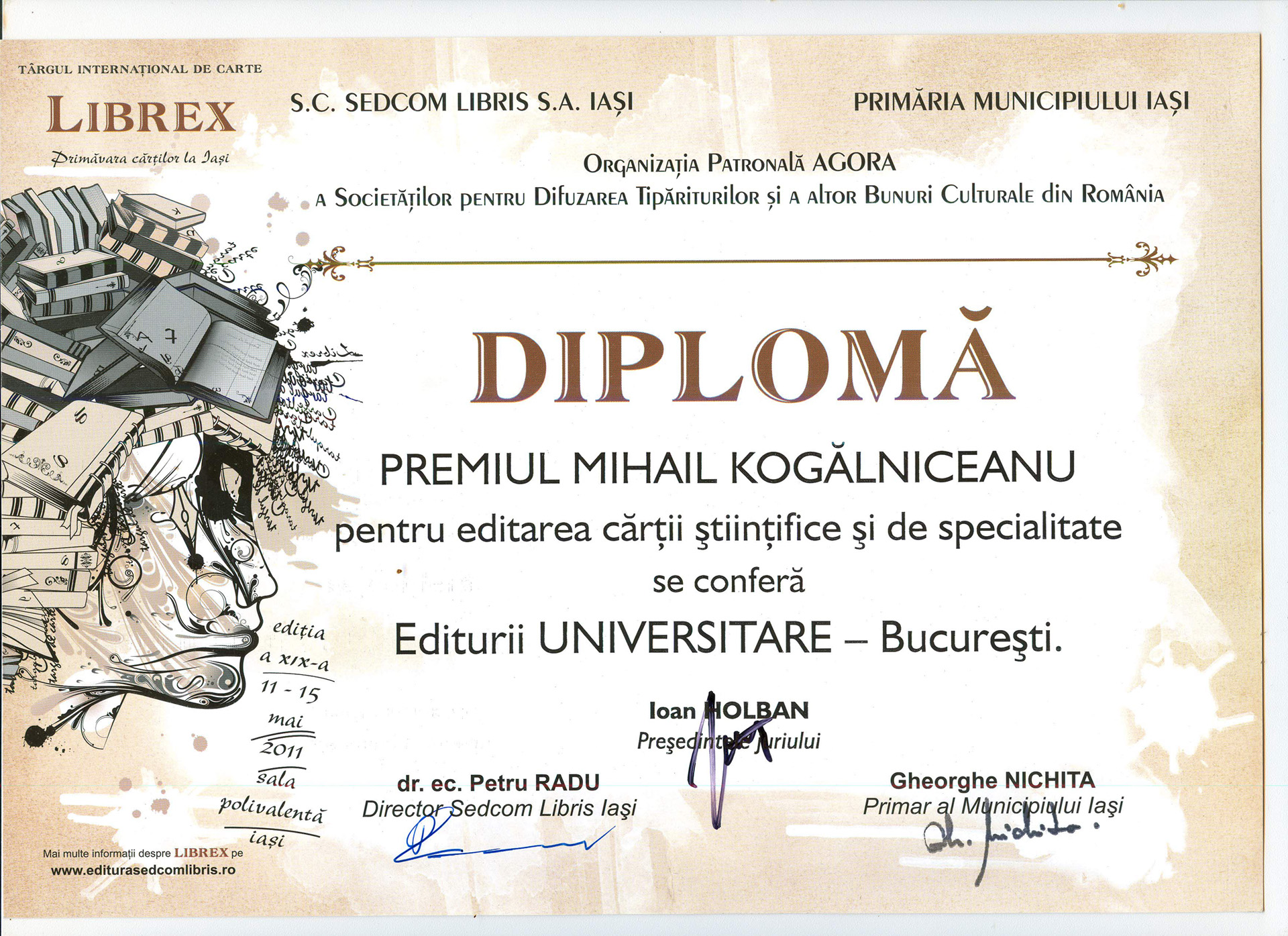 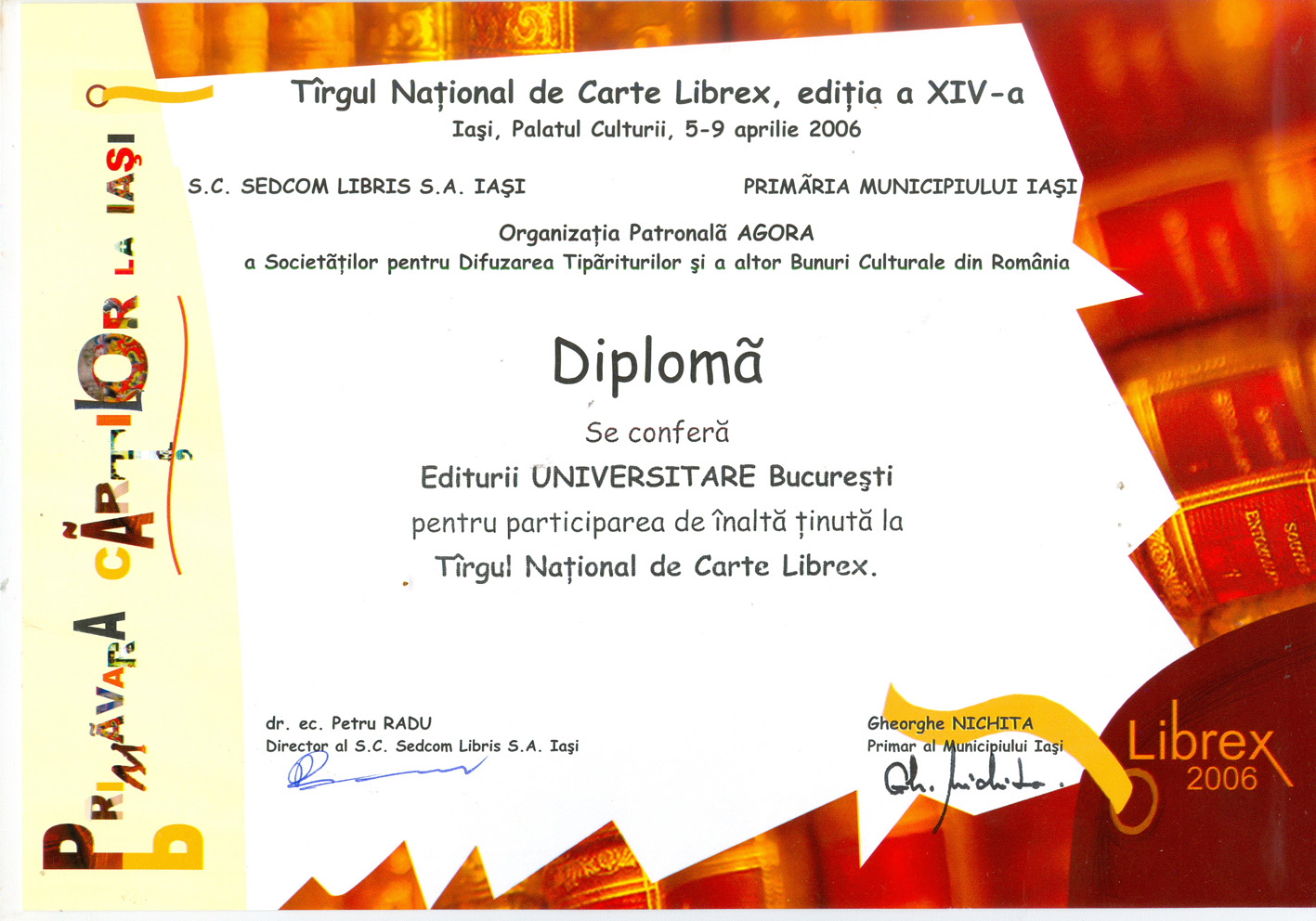 Editura Universitara has concluded a partnership with CROSSREF, through which it has the right to grant DOI published works, being the first publishing house in the country to obtain this recognition, and aims to continue serving Romanian science, publishing quality scientific papers.

We believe that all this - and many others – contribute to the faithful interpretation of the role we have taken - that of partner and advisor of you, our readers or collaborators.