In stock
Stock limit
Add to cart
Product Code: 9786062807542 Do you need help? 0745 200 718 / 0745 200 357
Add to wishlist Request information
Due to this phenomenon which is globalization, a multicausal process, due to the development of industry, the appearance of numerous inventions that have valued life in all its data, cultural influence becomes indisputable in a century perhaps too hasty with itself. Simultaneously with these influences, the taste for literature became more and more nuanced. One of the consequences is the complexity of literary genres, of avant-garde currents but also of the impact that dramaturgy has had globally at the same time with theater, stage, actor, stage performance, television, media.
Due to these data I was able to develop in my work such a special subject as the PARTICULARITIES OF ACTORIC CREATION FROM THE STAGE TO THE MEDIA UNIVERSE (IN THE DAY SPIRITUAL REALITY).

INTRODUCTORY NOTIONS / 3
I.1 The syncretism of the arts in stage creation / 30
I.2 Aesthetic theory of reception / 38

CHAPTER II. THE ESSENCE OF THE ACTOR'S ART / 63
II.1 Preliminary considerations: types of creators and artistic typologies / 87
Comic - general delimitations / 94
His comic writings / 102
The resizing of the comic in Caragiale's work / 105
Types of comics / 105
Aesthetic conceptualization of comedies / 112
II.2 Reception of the work of art: from contemplation and analysis, to comprehension and recreation / 117
II.3 The rebellious actor or “dreamed disobedience”, a way of assuming the essence of acting art / 121

CHAPTER III. EXPRESSIVE MODALITIES OF THE STAGE COMMUNICATION RELATED TO THE ACTOR / 128
III.1 Analysis applied to a text reading / 140
III.2 Medea, from the mythological heroine to the dramatic characters / 142
III.3 Premises for an open diversity of scenic expressions / 144
III.4 Jean Anouilh's Medea or the Light Behind the Shadows / 154
III.5 Medea-Jason, an archetype of dualism / 159

CHAPTER IV. THE ROAD OF THE FILM ACTOR TOWARDS HIMSELF / 160

CHAPTER V. ACTRESS EUGENIA SERBAN, FROM THE ART OF THEATER TO CINEMATOGRAPHY AND TELEVISION / 188


www.editurauniversitara.ro
If you want to express your opinion about this product you can add a review. 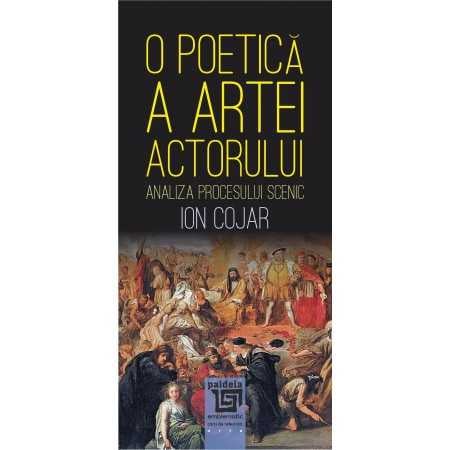